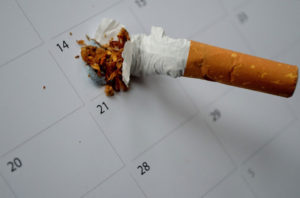 Stoptober is a health initiative run by the NHS, encouraging people to quit smoking for 28 days during the month of October. The premise is that after abstaining for this period of time, individuals are five times more likely to quit smoking permanently. Therefore, feel healthier, save money and improving overall health and wellbeing.

But as any smoker who’s quit or tried to quit before, smoking can be a difficult habit to kick so where do you start?

How do I stop smoking? Where do I start?

What treatments can help me quit smoking?

There are several types of treatment available, including nicotine replacement in the form of patches, gum, inhaler, nasal spray, microtablets or lozenges.

Can hypnotherapy stop me craving cigarettes?

Hypnotherapy (or hypnosis) is a popular treatment for quitting smoking. Hypnosis is the most effective way of giving up smoking, according to the largest ever scientific comparison of ways of breaking the habit. Willpower, it turns out, counts for very little.

‘Combination’ techniques, combining, for example, exercise and breathing therapy, came second with a success rate of 29 per cent. Smoke aversion, in which smokers have their own warm, stale cigarette smoke blown back into their faces, achieved a 25 per cent success rate, followed by acupuncture at 24 per cent.

The least successful method turned out to be advice from GPs, which appears to convince virtually no one to give up. Sheer willpower proved little better, with a success rate of only 6 per cent. Self-help, in the form of books or mail-order advice, achieved modest success – around 9 per cent, while nicotine gum was a little better at 10 per cent.

In the New Scientist report David Pollock, director of ASH, said he was surprised by the success of hypnosis, which anecdotal evidence had suggested was not very effective. One organisation not surprised by the results is the British Society of Medical & Dental Hypnosis. Christopher Pattinson, the society’s academic chairman, said that current hypnosis techniques are a far cry from their
popular image of music-hall tricks involving swinging fob watches. The latest relaxation techniques achieve success rates of up to 60 per cent from a single session, he said.

Nonetheless, hypnotherapy isn’t licensed for NHS use, although lots of smokers try it and the majority of clients that visit Mike Lawrence succeed in quitting.

To find out if you can see a hypnotherapist on the NHS in your area, ask your GP or local clinical commissioning group (CCG)

Are e-cigarettes bad for you? Can they help me quit?

“E-cigarettes are believed by most experts to be a lot safer than smoking tobacco products. Most contain nicotine and so inhaling from an e-cigarette will replace the effect of nicotine in cigarettes, which accounts for their addictiveness. However 2018 in a March study published in Plos One suggests E-cigarettes cause more harm than good.

So, e-cigarettes can help you quit conventional cigarettes and can be especially useful in the early stages of quitting. However, because the long-term health effects of vaping are not yet known, the prolonged use of e-cigarettes is not recommended.

For more information, help and support please take a look at the stop smoking page, or if you’ve tried to give up and started again, read some of the testimonials from people who are now non-smokers click on the link Quit Smoking Now.